Had lots to get ready for today, Catching an early morning flight to Melbourne so must be prepared Besides attending Armageddon Expo (I don't like the word expo why cant they just call it a convention like everyone else?) this weekend I'm hoping to catch up with some people and to talk comics with numerous agencies. I doubt I will have a good a time as I did a few months ago at comic-con or even less so as I did last year at the same con. But who knows maybe suprising!

Good news today I spoke to the powers that be about my first comic book cover coming out and it looks like a definite December release only 3 months late but hey it wouldn't be 'Image' if they were on time! The website will finally be online at the same time Until then you have this Blog to stay in contact.

And now heres Something SCARY for Halloween the worst haircut in the world when I actually had hair that is..... Circa 1982. No thats not Cooties on my chin we never found out what it was it appeared then disappeared after the doctor made my mum put Hot salt water on it. Maybe it was a crustacion? 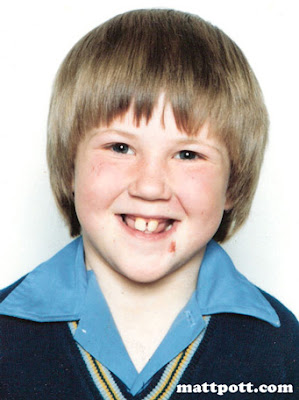 I hope to speak to you all on Hallows Eve!!
Posted by Unknown at 5:55 AM