A few weeks back I saw how they made a Late Tonight Show at CBS studios. It was Late Late with Craig Ferguson I knew him from The Drew Carey Show when I loved it before it went all weird and from an episode of Red Dwarf!! 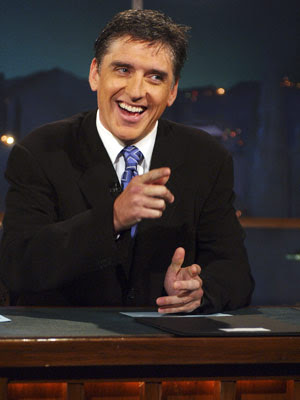 Anyway so me and Mona went and saw it, I never had been to one before so the experience was new. We waited in line with a rather obnoxious old guy (yes he dyed his hair) who was from OKLAHOMA!! And he made the worst insult possible 'You Australians, British, Scottish SOUND ALL THE SAME!!' To which I replied...... 'WHAT I THINK YOU MEAN 'JUST NOT AMERICAN'
'Yeeeeeeeeep Thats a good way o' puttin' it!!' he said. DORK!! Anyway he came all the way from OKLAHOMA to LA with his Mutton Dressed as Lamb Wife and two Daughters who belonged in the ValleyGirl Hall of Fame so that one of them 'ABBY' could become a SuperModel!! I'm Serious!!

Theres a lot of Fakery that goes on during the Taping process. We met the warm up guy and he said Laugh even when its not funny. So We Did. Laugh when Craig says something insulting to you. so we did. Clap and Cheer even when you dont want too. and guess what?? WE ALL DID!! In Fact they just want us for our laughs and not to ENTERTAIN. The only guest was Colin Hanks who was on for 8 minutes and the whole conversation seemed scripted!! The other guest was already pre-recorded. So after less than an hour that was it!! Even though it was Wednesday it was for the Friday Show too which is even more fake!!

Craig was funny though on and off air, Polite and Appreciated people being there. But it was Too Short and soon as it was over Craig was outta there and we had to still sit and watch stuff to pre record our laughs if it wasnt enough we had to watch it again

Also 'Abby' got herself on TV as she asked Craig to Rub her foot During the Commercial Break and made a BIG note of herself just like her Mutt Mother so it seems that ValleyGirls get what they want Don't They??.

I would also like to take this opportunity to squash the rumour that I am an indeed drawing again!! This is UNTRUE. Also I did not receive the complete Adobe Creative Suite from a Beautiful Angel from heaven who shall remain nameless. That I now have a CS3 version of Illustrator as well as Photoshop, Flash, Premiere, Dreamweaver and Fireworks on my Vista Controlled Laptop is just a pure coincidence!!
Posted by Unknown at 9:18 PM