Here's some art from a comic I used to get called Criminal Macabre from Steve Niles. I really stopped buying comics when at Seven Dollars per book I realised I was buying Land Fill of no real value (despite the art and writing) and the boxes of all those other books from years of collecting that I do have will have to head out to the garbage soon. 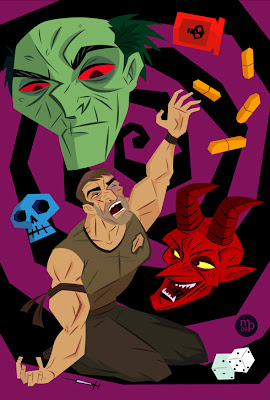 I have given up all hope hearing from Lionsgate on my proposal for doing the Mad Monster Party dvd cover it has nothing to do with the money (apparently the budget was Zero anyway) its just something that would have gone full circle if I had managed to get it. But its one of those things where you just think what the hell are they doing???
Posted by Unknown at 5:20 PM