Well I know people have thoughts that everything is just dandy for me. I got some messages on Facebook Last night after the announcement went public with Cries of Fowl and encouragement. But let me Tell ya there are some out there who are Bouncing with Glee I'd name names but I'm a Gentleman! Stick with this Blog we'll continue to see where I head to the Poverty line.

I have made a few Promises to People and the art will continue to Trickle. I hope to finish the Darth Vader Project and hopefully they will be understanding enough to give me some extra time to finish due the Chicken Pox delay.

The Mad Monster Party Project is DEAD, they weren't Interested and the sad thing is I would have damn thing for almost free. So I'm moving Along................maybe

I will Leave you tonight with one of My favourite Cartoons I watched in 5 minute chunks. It was Based on the Comic by Chester Gould and really if it hadn't been for 'Dick Tracy' there may never have been a Batman or Rogues Gallery because Kane ripped that off Tracy.
Anyway The Cartoon show was Okay, I think it would have been better if they had actually Had Dick Tracy in the Show doing the detecting instead of Comic Sidekicks. Maybe one Day someone will pick up on that idea eventually for the REAL cartoon. I remember looking for them in the Movie.... you remember the movie right?? Oi I still have no idea what it was about a few years Ago I picked up some cheap action toys off ebay for 99c of course with postage it balloon to $15 but hey it was Madonna and Dick. 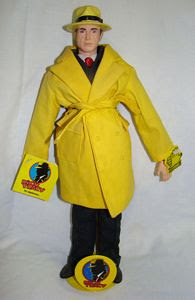 And heres the Stylized Intro.