I was preparing another blog post when I heard the horrible news yesterday of Mike Wieringo's premature death. Mike was not only a very talented comic book artist but also a constant contributer to the place I have called my second home on the net for the past six years the drawingboard.org

With all my difficulties I am going through now in my personal life, they are insignificant compared to a tragedy such as this. Mike was still a young man and he still should have had years ahead of him and an artists life shouldn't end, not like this....so short.I had been a big fan of Mikes Tellos comic books when I could get them and to me he was the only artist in my mind to fully understand what the Fantastic Four was all about graphically. I had never met him personally. But yes, I feel I knew him! A few years ago there was a Tellos art thread on the drawingboard and I took the opportunity to do a little something one of his characters in a disney style (he loved disney) and Mike had nothing but good things to say about the art I had created and it raised my spirits, hopes and dreams he had a knack of doing that to everyone he spoke too.

And most recently when I joined myspace Mike was one of the first BIG names I seeked out and one of the too few to accept my friend request. When he did so though I was over the Moon, and remember going around saying to anyone who would listen "Mike Wieringo is my MYSPACE friend!!!"
My last contact with Mike was when I emailed him earlier in the year a fan letter I 'NEVER' write fan letters but for Mike I did. He never wrote back he didn't need to. I knew that he was busy man and gets mail from crazed fans. I was just another Fan...one of thousands. I'm so glad I sent it now!!

So when I go to San Diego Comic Con next year, I'm going to straight to the nearest pub, buy a beer and raise my glass and say.... 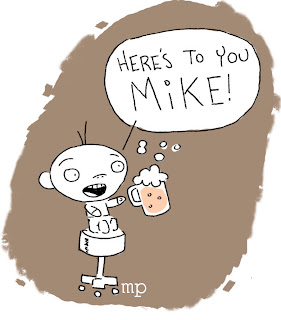