Never Sit Next to an Italian Couple!!

I promised do a video while I was here and I did do one with martin but it ended up being out of sinc. So I did a quick one down in the park after having my lunch today. Its a 3gp file that you can view in a Quicktime player and you can download directly from DOWNLOAD VIDEO HERE 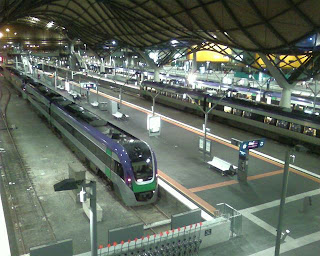 I hate Melbournes Train System it sucks, I ended up having to buy another ticket just to get home the other night after updating my Blog because I never validated it when I first left the train station. Man I was Pissed.

DAY NINE: WooT!!! I just managed to watch the Hellboy Animated movie Sword of Storms. I didn't mind it some animation fell a little flat but who am I to complain. I spent the day with my extended family, its my nephews birthday soon and I won't be here next month for it. So I did something for their party. Its a theme party of Space and My sister came up for a variation of an idea of pin the tail on the donkey called pin the Face on the astronaut. Anyway as any artist does I took it seriously and using the tools at my disposal I painted a rocketship in space.

One thing I learned is every artist must experience alot of different mediums and not stick to the same old thing remaining in a comfort zone. I am computer graphically educated so using paints I was out of my depth. One mistake and I couldn't use 'Cntrl-Z' to correct it. So 4 hours later I finished the artwork. 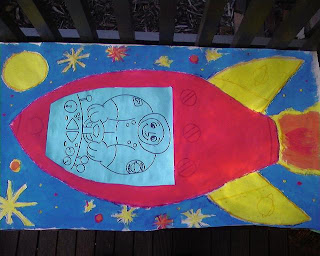 .........Okay you can stop laughing now. My thought process was what would 'Mary Blair' do!! Unfortunately I did the complete opposite and did what she would do now that shes dead or possibly towards the end of her career. But then you have to look at it this way your making it for Five Year Old KIDS!!. So they don't care if its not incredibly detailed all they want is their Astronaut in a space ship so they can stick his face on!! Kids understand shapes so you need to keep it incredibly simple for their developing minds!!

So I'm going to be posting this on the Drawingboard and expect to have my membership immediately revoked, which is a good thing I guess for all concerned.

But as a reward for all my hard labour drawing spaceships, my sister shouted me to see the recent Harry Potter film which is still showing at the movies. Is it goblet of fire?? I have no idea.... I don't really care all I know is that Rowling is going to steal more money, stupid ugly rich cow. Anyway the movie was OK.

Did that sound convincing? I was hoping for a little something called ACTION. For 3 quarters of the film nothing much happens and when it does there are alot of snowglobes falling around smashing everywhere!! The end speech sounded familiar......wait it was straight from Lord of The Rings ROTK 'Somethings are worth fighting for Mr Frodo, Sir' geez watch it on dvd folks thats not to say its awful and its not as walk out bad as Superman Returns. Just more action please is it too much to ask!!

DAY TEN So thats it Folks, Thats a WRAP!! well almost.....I leave tomorrow for home. The only thing I'm not looking forward to is carrying luggage and the 2 hour train and bus trip that awaits me to the airport Its been an amazing Ten Days. I have learnt so much about myself. I'm returning home no longer the nice guy I once was I'm returning Harder and much meaner. I have been replaced with the mirror universe version of myself just like Captain Kirk was in that classic Star Trek episode. I am now an a-hole so you better watch your step, I've even got a little goatee ooooooh SCARY!! 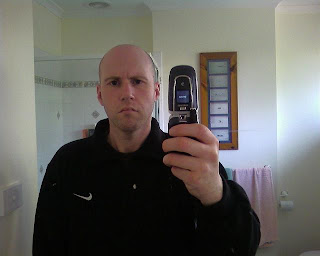 But, Seriously folks this has been a great relaxing vacation for me, I've appreciated my friends staying in contact with me while I've been here its given me that link to home. I've also got lots of crazy ideas I've been committing to paper and hope to begin work on them as soon as I get back. 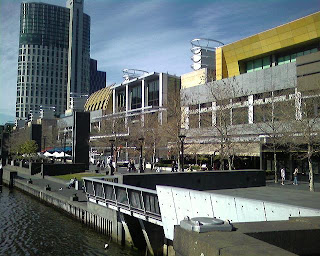 Stopped at the Crown for one final piece of Pizza, I just love Fresh Pizza!! 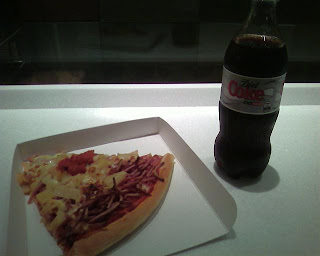 So I finish up here where I started at 'Mag Nation' and I guess you want to know why as the subject title suggests you never sit next to an Italian Couple. Well let me tell you if you ever do expect them to suck and fondle each other and make alot of grunting noises and the young girl ain't even pretty she has the biggest mole on the side of her face I've ever seen I think theres hair on it too. EWWWWWW Time to go folks. I feel ill. 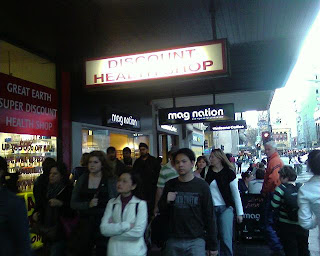 Anyway when I'm done here I'm off to the comic shop to pick myself up a Bobblehead of Francesca for Mad Monster Party I've been eyeing off for the past week. This is really it I'll see you back at home folks, Thanks for reading my Travel Blog I'll do it all again in October!! Later!!
Posted by Unknown at 10:47 PM