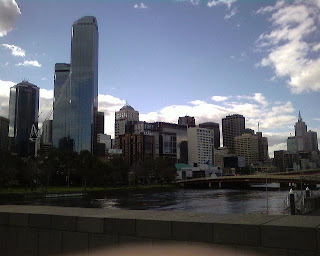 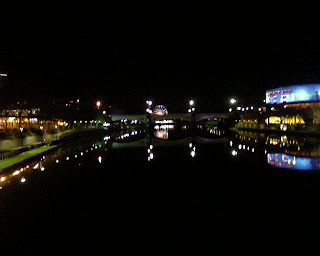 Having a lot of fun on my trip folks planning on doing it again sooner rather than later.
I just want to clarify some stuff before I get into this new entry. I am NOT leaving my Nuts and Bolts Blog. The reason I am posting here and not over there is because its a little easier to use Blogger when your running around. This blog will return to the way it was after I get back from my rest and relaxation holiday.

I am not overseas 'yet' but have travelled to the next state and am staying with relatives. My BIG US trip will happen hopefully next year when I plan for SanDiego 2008 and meet up with my Drawingboard Bretheren where we will have massive drinking binge Parties and go to strip clubs ( you in for that Josh and Kristen?). 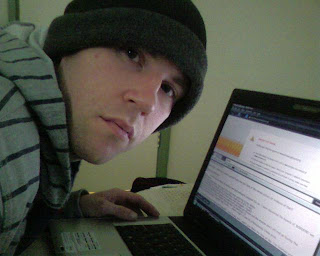 Melbourne is a Sin City, its the sort of place where if someone like say an underage 14 year old girl were to ask you for a cigarette and you say 'Sorry I Don't Smoke' they would tell you to 'F@CK You then' and proceed to let you know that if you did F@CK them you would probably get 2 years in prison for having underage sex with a minor' I use that as an example but it did actually happen there are witness' to this event. Hey None of what I tell you is made up!!

There are also the extra dodgy people, Melbourne is notorious for them. You cannot go a day without having a man suffering dementia come up to you and ask for money for a sick friend or needing to get to Sydney to see his ill daughter who needs urgent medical care because she has a hangnail. My favorite of all time is the single mother who runs around a pram (with a cabbage patch doll in) asking for a dollar so she can get the train home but what you have to ask her is If you got here surely you can get back??

DAY FOUR: I look like a cancer patient right now just look at this recent picture for evidence of that!! I had some KFC out at Knox Centre and someone snapped this pic. 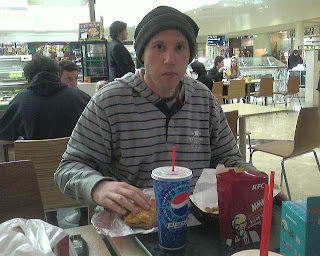 While shopping I have discovered the beauty of 'BORDERS' we don't have them back home but I had heard that they were quite big in the states.
They actually had 'The Art of The Incredibles' book but at $75 it was out of my price range and the dust cover was damaged. I hadn't planned to buy anything and save my money but that idea got thrown out the window and I did end up buying the dvd box set of 'Life On Mars' Series One starring the delicious Liz White. Now thats a girl I couldn't say no too..... ahem cough. it was at a Ridiculously Cheap price too. 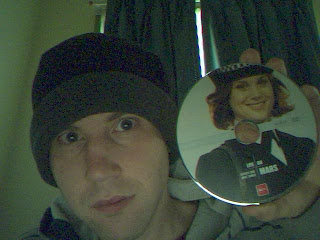 And today I've decided to move on from hating people I once loved, now I won't even give them the time of day. I've finished with women PERIOD (except my closest friends). I got asked the other day if there was a reason I really, really hate them right now. Hell Yeah. Lets just say that if I had the choice of trusting another woman or A Blood Sucking Leech then I would choose the leech atleast knows what it wants and is trustworthy!! Speak of the devil heres one now...... 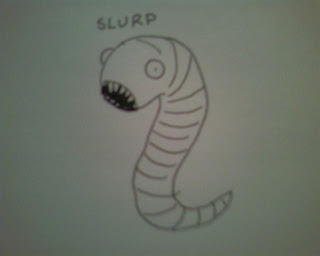 I realise that not all girls are bad. Its just the millions that say they AREN'T that actually ARE!! Most of their personalities suck and are so fake. I see women now just as lazy sex objects and not real people I know it wasn't me this time its the woman PERIOD!! So I have decided that every wednesday is 'Anti-Girl Day' and my art posts will reflect that so stay tuned.

DAY FIVE: Halfway Mark I can't believe how incredibly fast this trip is going. Took it real easy today. No city just sitting back and watched an episode of CSI Miami. My god thats a Bad show. One of the cops died in it and was pronounced dead and he still came back to life. Braindead television.
So I ended up going out and buying a copy of GTA: Vice City Stories for my psp only problem is I have disovered that the controls don't work anymore on my psp. And I was so looking forward to stealing cars and running over girls with it, which I guess is very disturbing..... but alot of fun :D
I also went ahead and married my laptop we have alot in common and it doesn't drink and talk back as much as others I've met. 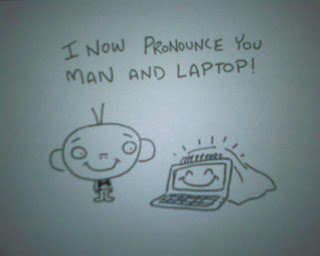 DAY SIX: I couldn't wait to hit Melbourne again, So I caught the lunchtime train, in the carriage I noticed a girl sketching an incredibly detailed picture very art deco of a girls face. amazing. Another girl hopped on who was expecting me to offer my seat to her since the train was packed but you know I wasn't in a very giving mood to offer it especially to people who expect me to. Once arriving in the city. My first stop was Comic Store 'Minotaur' where I had a quick look and then headed straight to Crown Casino for a Bite to eat. Me and Martin had a great Pizza the other night from there and I decided to go Pizza once again. Just Checkout the Size of it!! I thought I would take the opportunity to find the Melbourne Exhibition Centre where a big comic convention will be held in October. Still not sure if I'll be going yet anyway its very big place. 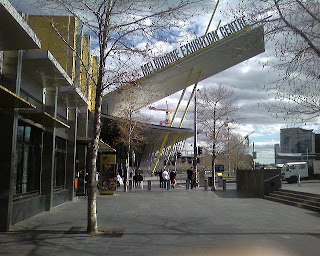 Finished lunch and headed back to Minotaur (I hadn't finished looking) and Browsed the books. I picked up 'Rocketo' Volume Two and a Zombie book called 'Champion of the Worms' written by Mike Mignola and art by Pat McKeown (a very underated cartoonist). While also looking around I noticed that some cover art on a small book looked familiar. It looked like Shane Glines style and It WAS!!!!!! They had a book by Shane so I grabbed it, its called 'Sparrow' Book Four I had no idea that he had a book like this out in fact I want the other volumes. The books sealed but it has to be good!!

So thats my trip so far I'm having a great time, no hassles and very rarely bored.
My next update will be in another few days. Later my friends!!
Posted by Unknown at 10:08 PM