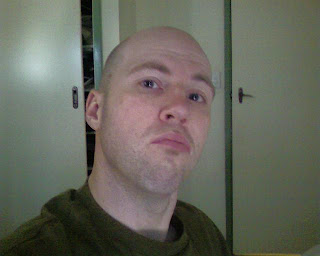 Its a strange thing coincidence.

I spent almost 3 hours on my laptop on Thursday I normally wouldn't be on the net so long but not only did I have to do a Blog Entry but also various emails to friends. Then the battery finally died so I decided to pack it up and head to the Train Station. I was going to stop into the express market and grab some drink for the long hour trip home but the size of the waiting queues nixed that idea. So I continued on until I literally ran into a friend of a friend who was now living in Melbourne from Tasmania. I hadn't seen him in ages and we spent 15 minutes talking in the middle of the street during peak hour.

He's working here and just moved to another suburb.

Which got me thinking as to how I would cope living in a place like Melbourne permanent like. I've been thinking of this for awhile and now that I'm on my own it wouldn't be out of the question. I've been putting in for work here and there in Melbourne so maybe I should look at it more seriously. Still don't quote me on it....yet. 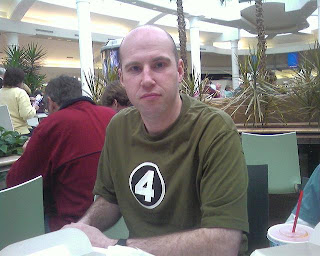 DAY SEVEN: I've joined the Fantastic Four, I'm known as DropDead-Guy. My superpower is that evil super villainess dump me and feel secure but then I strike them unawares with a cursed laserbeam which lasts an eternity. HAH!!

Been spending the day shopping around for a new PSP, prices are still way too expensive even after two years of it being out in stores. And Melbournes a very competitive place normally. The best I could find was $274 and I paid 400 for mine on its release. I'm heading back into the city tomorrow to look around who knows may find it cheaper. 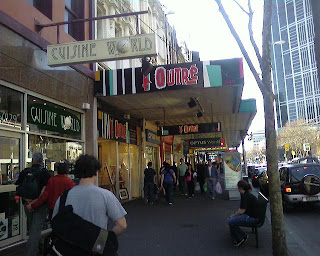 DAY EIGHT: No luck with a cheap replacement PSP. Won't even bother looking for one now. But I found an art store called OUTRE that had Lynne Naylor Art Prints for sale and alot of SHAG stuff again just prints and scarygirl stuff. But the store that used to be there had much better stuff like animation Cels and original drawings. Oh Well obviously wasn't enough money in it.

So here I am now in 'Mag Nation' writing to this blog and they have Garbage music playing in the background and they just turned the airconditioning on very cold to kickout my sorry ass (the girls serving really hate my ass and want me out of here) So I get the message and will write my final blog entry here in Melbourne on monday. Until then Later Folks!!
Posted by Unknown at 11:05 PM