Ming The Merciless and Princess Aura! 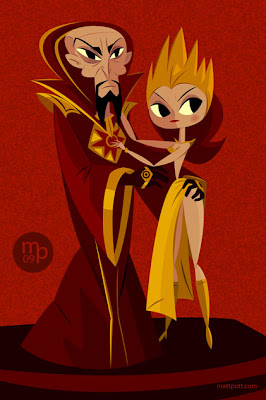 I'm currently watching the DvD of the Filmation Version of 'Flash Gordon' Cartoon Series which I picked up over in Los Angeles last year. I havent seen it in years so its strange to see it with new eyes. I remember being a kid waiting to see the next installment every night on the ABC.
It hasn't held up well in fact its so bad I was laughing at the animation but theres certainly its charm about it. Having a chance also to see the original 15 minutes or so that was cut out of the series broadcast (because it had Nazis in it) the Budget seemed to be spent on that and so the rest of the series looked like recycled junk.

This however got me thinking as to what a new series would look like if it was made today and if I was in Charge of it. So heres a quick Ming the Merciless and his Daughter Princess Aura and I know I based them mostly on the Movie Versions but they were cool and yes I probably would have made them into more the Comic version given a chance. But then I'm not doing designs for the show now am I??

Check out this new Blog by my friend Ed Smith Jr. called Heade of Household, hes wanting feedback so go over and give him some!!
Posted by Unknown at 9:02 AM