Its been great to actually DRAW again after so long, I'm beginning to get the angst of is it 'good enough,' once again which isn't a feeling I've had for well over a month! I've really missed it, well the Drawing part! 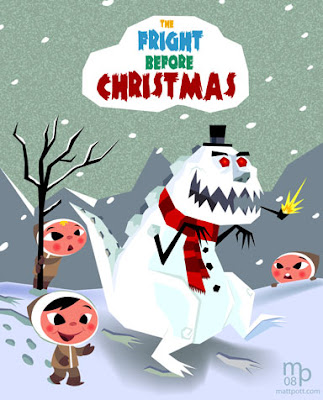 As you can see from the above image my Christmas Card is finished and been sent out to most of my online friends. I say most because I have so many thanks to myspace and facebook I'm bound to forget someone, If you never recieved one my apologies its been so difficult remembering everybody!!

Watched a few films lately, I finally watched the Sinbad: Eye of the Tiger. Seeing a young Jane Seymour was very funny know what a cold and heartless woman she is in real life. What was the point of the Minotaur character or 'Minoton' as they called it seemed totally wasted!! I also found out later that Peter Mayhew 'Chewbacca' was the guy behind the Bull Mask prior to doing chewie! The blonde girl was certainly fetching but when a girl falls for a Baboon you need to ask questions. Serious Questions....

Dellamorte Dellamore this is right up there with my all time favorite horror movies, Made in Italy and going under the name of Cemetary Man in the US I caught this on late night television on SBS years ago. I love this film so much I imported this dvd especially from Italy because it still hasnt seen a release here for whatever reason.

Also as a special Christmas treat our local digital station ABC2 on Saturday Night gave us a screening of HR PufNStuf The Movie! One of my earliest memories as a toddler is seeing Jimmy Battle it out with Witchiepoo for that magic flute on saturday mornings every week. I only ever saw the movie once in a school hall. So it was cool to see Jimmy in the real world first before he landed on Living Island! I felt I was reliving my childhood in those two hours too much fun! One think that always bothered me was when Pufnstuf was on other shows he never looked the same he always seemed off unless it was on the show. I dont think they ever got the extra puppets right for him.

My new phone came with a redeemable voucher for a 'free' wireless pre paid access usb dongle thingy so I will be able to use that whenever I am visiting Melbourne, Bruny Island or out and about from now on with my laptop. Unless I dont have any money for credit then I'm screwed!
Posted by Unknown at 5:51 AM