The Year Without an Xbox360!

This Picture of me was taken at Disneyland I think it was called 'Animation Studio' but that was a bit of lie. All you did was copy an artist drawing a character no animation was to be used. For this session it was how to draw Jack Skellington! Thanks to Mona for the Photo!! 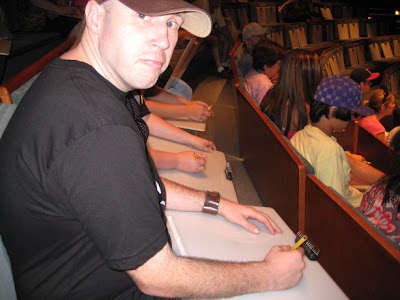 I hope everbody has a great Holiday season this year, despite me spending it at home on my own well thats not totally true I have my dog to keep me company. I got some presents left for me but I knew what I was getting before I opened them! A couple of video games for my Nintendo DS Wario: Master of Disguise and Super Mario Bros. And the only dvd I recieved was the Platinum edition of the classic 101 Dalmations. Billie my dog didnt miss out either he got a new Squeeky Toy to play with!

I still don't have a new X-Box 360 I guess that will come next year.

So prepare yourselves..........It is with heartfelt regret that I inform everyone that my Perhapanauts cover will not be out in January 2009 in fact not for awhile. This is nobodies fault no-one is responsible. I'm upset yeah who wouldn't be but you know crap happens and worse things are going on in the world today to give a damn about a stupid cover.

I was emailed today by Todd and he told me the news and the reasons behind the decision and it makes alot of sense. I'm not the only one to have lost out in this, I only worked on the outside but a bunch of people worked on the inside of the special Halloween issue and now it will be skipped and may be released september of 2009. If I had to look at an upside my name will be published again in a future previews heh!

So what for me now? I have always tried to keep an honest blog. If something happens I tell it as it is! I'm totally Broke, Broker than Broke really. I've been calling around trying to get work one thing as an artist is that everybody wants something for nothing that your art is just a hobby and you should feel honoured they like it and want to use it. But nothing doesnt pay the bills!

Quite a few times have I been in this trap. A few years ago a friend of my fathers came up with a grand plan for selling t-shirts my dad told him that I was an artist and he wanted to see me. I didn't want to do it I could smell a waste of time. But on my dads constant harping I agreed to look into it. After five minutes in the meeting I knew this was just crap and wanted nothing to do with it. But my dad wouldnt let it go so I did the work, and then the guy turned around and said we've decided to no longer pursue this. Man was I pissed. The guy was a Locksmith and if he put some locks in for me and I turned around and said hey you know I've changed my mind and am not gonna pay you It would be just EXACTLY the same but no they do not understand this for anyone who is not of an artistic nature.

Well my christmas movie tonight was Abbott & Costello Meet Frankenstein. This is believed to be the first time that Frankenstein's Monster was referred too as 'Franky' But as we know he was really called Herman hahah. Funny Movie though Been a longtime fan of the Wolfman too so was great to have Lon Chaney Jr back in the role and a great cameo by Vincent Price!