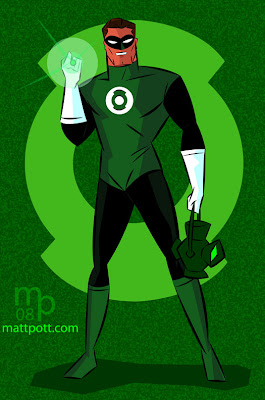 My Friend Martin is a massive Green Lantern geek, and I too enjoy the character of Hal Jordon. I was a bit miffed they didnt have him in the Justice League cartoon because they needed a 'Black Guy' so tell me who would have sold better as a toy Hal or John Stewart?? Well although we may never know the fact the Green Lantern figures were the ONLY ones left on the shelves might prove this theory of debate.

Anyway back to Hal, I think once DC got over the lets make him go insane storyline and everybody else started doing it they realised what an integral character he was in the Universe and began cleaning up their mess.Darwyn Cookes main use of Green Lantern in 'The New Frontier' I think solidified that Hal was a man to be reckoned with.

So this will be my last picture post for this year tomorrow I'll look at 2008 as a whole and review the personal highs and lows!
Posted by Unknown at 7:39 PM