Have you noticed the new colour scheme? Its time for a change. Hope Ya Like It!! A new much suitable title will also be up soon.

I've had the flu now for 4 weeks, First thing I did when I got home was see the doctor TWICE. With a heap of Antibiotics given to me. I'm going down to Bruny Island to think, relax and get over this horrible flu. My dog has missed me since I've been away so he will also be coming down so we can spend time together.

However this week on my return home I discovered the loss of a great friend my trusty PC finally kicked the bucket during the last six weeks the winter cold had been taking its toll. After almost 5 years she just gave out. I revived her last year after an expensive and well un-necessary overhaul.

Thankfully my laptop was up to the task of taking over. But theres nothing like the feel of a desktop computer blaring Halfe-Life 2 with surround. Unfortunately I lost some illustrator files on the desktop which I hope to recover eventually using some frankenstein monster techniques of transferring hard drives into some inferior pc's but that will happen later. 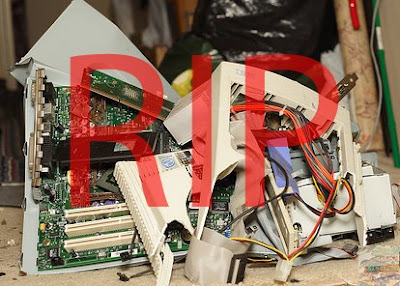 So I guess you want to know, what my next move is now that I'm back in the most Uncreative City in the World!!

Well honestly I don't know. Tasmanias not for me I know that now. I'm sure there are many of you whom think living on an island with a population of 494,520 would be wonderful. Unfortunately its not for Artists unless your from Queensland purporting to be a boring animation company exploiting another State Government while employing people from other states and countries........... ahem But I Digress!!

I really really hate Tasmania, its Boredom Off the Scale. Don't ever come here, don't even try unless you are very old and grey and ready to slip away and want to go Peacefully in the night!!
Then You'll Love It!!

But for me now well I'm going away for a week taking my laptop, printer, scanner, external drives and wacom tablet with me to Bruny Island. Please don't be sad I'm going to Create something wondeful I hope.

So I'm very sorry to cut this return so short. I know I have not been able to update this blog as much as I would like but I hope that will soon change.