Well here it is, Perhapanauts cover #6 in all its Horror Glory, theres a backstory to this but I will talk about that when its finally out in December. But heres your sneak peek if you check this blog out without being prompted because you like my work. Thanks!! 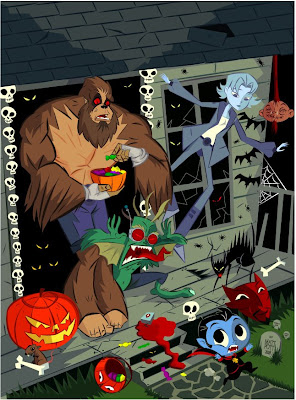 On the subject of Comics, I'm just working on page 3 of my comic story I came up with about 5 years ago originally entitled 'Last Rites' a Blood 'N Guts trilogy! involving a cowboys fight against an evil Vampyre Empire set in a Post Modern Apocolyptic Old West, and best described as a Sergio Leone Western meets Lord of the Rings with a touch of Mad Max thrown in for good measure. The style at the moment is apparently very Samurai Jack which I guess is not a bad thing when you think about it. I want to add some Mary Blair in there too. Just dont compare the two, they are very different in substance and graphic violence.

As for Beginnings, when this story first popped in my noggin', I thought of it as a very basic vampire story where everything was set back in the 1800's and it all went terribly wrong but the further I thought of it the more complex it got. I've had a couple of writers tackle the story but well they never quite understood what I had envisioned instead including things I felt had no feeling to a western. So it was put on the back burner until I felt the time was right and I can do it myself.

Currently my plan is for three 22 pages at this time with the first to be finished by Christmas as a tester of the waters so to speak. As to whether it will ever see publication is something I'm not even thinking about right now until the first part is completed and recieved. Overall I've got a Beginning a Middle and an End which I guess is very important! This is a Project I need to do, or I'll go insane. I know many people would prefer an S.O.S comic but I feel it is best to do something else while I still have some motivation in getting something done. If you know me personally you'll know its been a tough few months and even if this fails I'll maybe feel I may have accomplished something atleast.
Posted by Unknown at 8:42 PM