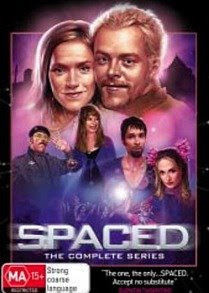 Picked up today one of the greatest series I have NEVER seen on DVD, 'SPACED'. I saw the press announcement at comic con back in July with a panel with Simon Pegg and that Wright guy for this. Yes I'm still pissed about being kicked out of the autograph line I even wrote to Wright and said it was RIDICULOUS!! As if I expected an answer back hes to busy writing cornetto films. Yes I know its not his fault Comic-Con you run a crap ship and failed that time!! But yeah I've been waiting for this release in Australia and a store here in melbourne was selling it for just $40 so I grabbed it. And Can't wait to watch it.

Also grabbed Mignolas new Hellboy book and yes he is an A-Hole from all accounts but a good artist. They say that when you make it big you treat people like crap. I will never do SO!! and if I do please kick me in the head!
Posted by Unknown at 10:20 PM