Really Back For Good!!

So here I am late January and not much to show for it, I've been running on auto pilot these past few weeks. I'm going to order myself to update this blog as much as possible everyweek now. And that will include new Logopolis cartoons. But for right now I am under deadline for a Pin Up and I will talk about that more later. Until then checkout this old cartoon I've had in stock. You have to guess what I'm staring at.....

Posted by Unknown at 5:21 AM No comments: 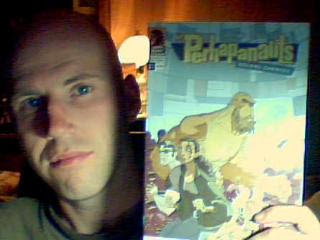 Hopefully you haven't deserted me I've been really busy, my work seems to have taken a great turn for the better and I will expleain mostly later.

Recently I've been priviliged enough to be chatting to the great Todd Dezago. Todds well known in the ComicBook World as the writer of Sensational Spider-Man and co-creator and writer of one of my all time favorite fun books 'TELLOS'. Todd has of course moved on and is now doing another creator owned property 'The Perhapanauts' drawn by Craig Rousseau which has just moved publishers to Image Comics and will see print again in February.

Anyway Todds a really nice guy and told me he liked my art and was kind enough to send me some comics this week of the first two Mini-Series of 'The Perhapanauts' which I will be reading this weekend.

I hope to pay in kind by doing a pin-up of some of the characters of the book. For more info on the book theres the official website you can find HERE and theres also todds blog HERE. I've already read the first issue and its alot of fun and can't wait to read the rest. If you like reading books like 'B.P.R.D.' and 'Invincible' you'll love this even more, it is its own Brilliant Monster. So before you go check it out at your local comics store next month pick up the earlier Trade Paperbacks unless you live in Tasmania then your screwed.

Another incredibly talented professional I have had the fortune to run into online is Chris Sanders. You may know his work as the Director and Voice of Disneys 'Lilo and Stitch' and its spinoffs. I love the way chris designed the girls in that movie with there true proportions so anyway it was great to hear that he likes some of my girls too. Chris is now working for dreamworks but he has a fantastic cartoon strip series up called 'Kiskaloo' which is getting a giant fan following because of its main protaganist the un-named as of yet 'Cat in the Patch' go check it out HERE if you haven't already and prepare for cute fun.

So thats it from me for now I am officially back for 2008, with more updating goodness coming up shortly including a new 'Logopolis' cartoon for those that care and a look at the web artists that inspire me!!
Posted by Unknown at 6:42 AM No comments: