I had some wonderful emails to the last cartoon I posted mostly from 'women' that were overwhelmingly positive about it but confused as to thinking it was the guy side that was the problem yeah keep telling yourself that girls!! Hah!! I want to make this a weekly thing and as I was unable to post last week I've decided to make it up by posting 2 new cartoons.

Now I don't know if this happens alot to anyone else but on occassion I've had complete strangers tell me how ugly they think I am. Now I'm not going to deny I'm Brad Pitt but gee do they have to be so nasty. This doesn't happen everyday of course just every couple of years or so. The most recent was last week on the bus into the city I'm minding my own business when this girl turns and yells..... 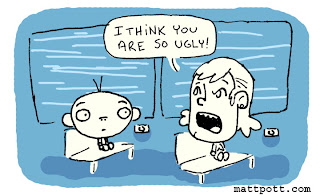 I've come up with the ultimate way to repel unwanted attention believe me this will work, I've tried it.

The following story I am about to tell is a True account. There are some who will not believe this story mainly animation professionals who live in their own little world and thats fine believe what you want. But I know this to be true because it happened to me......

Some years ago I was a rabid animation buff, I loved Cel artworks and I had begun a hefty collection. It was through this affiliation that I recieved an invite to meet my very first animator.
I couldn't wait I was so happy I had never met anyone who had worked in this particular field and it just seemed that throughout my life these particular people were like gods to me. To make a character literally come to life was astounding.

So it was I decided that I must thank this animator for all the joy he had given me throughout the years. But how??? I soon decided that by using my knowledge of art I would create a piece of artwork, a Collage of all the characters he had worked with and in the center I would place a caricature of the animator. I poured my heart and soul into the art finding inspiration where ever I could. And Three Days later it was complete I was so Proud of my achievement.

And so that night I went to the party to meet a man I believed to be a god. I waited in line patiently as I watched many a person go up and talk to the animator. And then it was my turn I pulled out my artwork and presented it to him and said thankyou. The Animator looked at it and said 'Oh My Well Thankyou Its very good' and I began to walk away believing mission accomplished but then I turned around......... I shouldn't have turned around.... in the corner of my eye and to my dissallusionment he flipped the artwork to the blank page and began to scribble on it ' HE WAS CHECKING HIS ART PENS ON IT!!' and then he tossed it away. I was crushed!! 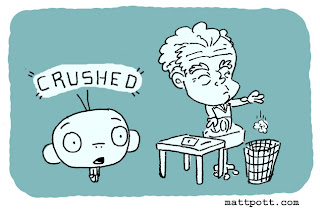 He died shortly after and the gallery where we had met sent out flyers using his death to make a quick sale stating that now his artwork was worth more and they still had plenty of his artworks still for sale at rock bottom prices. Rough Justice maybe for a career that spanned 60 years.

So thats my first meeting with a real life animator, I've had a few more since then and actually much better experiences but then you would only want to know about the bad ones now wouldn't you?
Posted by Unknown at 6:44 AM 2 comments:

Been back for a week and I really enjoyed myself, I miss Melbourne and its fast pace I can't wait to get back there next month. But for now it's back to art blogging and I have something very exciting my very first Anti-Girl cartoon.

I was asked recently if I really was going to do it make a mockery of girls and I can't see why not. Hopefully this will be seen for what it is a Tongue-in-Cheek look at what makes girls so damn NUTS!! And why we put up with them.
These cartoons will be posted on wednesdays only all my other crazy stories and adventures in the world of cartoons will continue on every other day! If you have any comments on the subject I'd love to hear them! 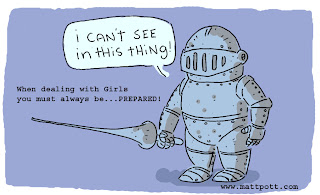 Posted by Unknown at 6:28 AM No comments: