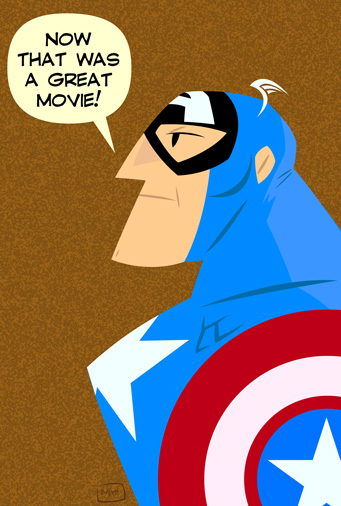 So Yes I treated myself to Captain America: The First Avenger in 3D. And I gotta say out of DC and Marvel movies Marvel wins hands down for there love of Continuity and nods to other heroes. Now as you know I'm not the biggest fan of 'The Dark Knight' Mostly because it was so dark it alienated me from the movie I hate depressive films I get enough of that in my daily humdrum life. Captain America is Heap of Fun Escapism, It would have been nice to have a few more 'lighter' moments but the movie doesnt go over the top in either direction.

One of the things I disliked about the earlier Marvel Movies was their lack of reference within each universe to anything outside that particular 'Heroes' world. Thankfully once IronMan proved it could be done it seemed a given that they would continue to allow all the Franchises to emerge. From the Pitiful Fantastic Four movies to just Bad HULK movies I was worried that they may not come out of the Comic Book Curse. But they Have.

Back to Captain America and OMG the Comic refences are everywhere, Theres a particular character that showed up early in the film and only at a short glance that I had no idea was appearing but it buried me in this universe and it created a feeling that this movie was made with alot of love and care to the Lineage of Marvel. Something that DC Comics has yet to still Grasp sadly. I really enjoyed Chris Evans Performance I honestly had my doubts since he had played Johnny Storm and he left a bad impression on me (as well as the film) But he pulled it off anyway I promised myself there shall be no spoilers here I really want you to go see this movie if you have the time its a Great Ride, if somewhat Short only perhaps because I was left wanting more.
Posted by Unknown at 10:44 AM