I've been in Melbourne for a week so far, It went from Kinda Bad to really Awesome during that time. Supanova was a bit busy this year particulary saturday where I tried to talk to people. They really didn't show and most totally flaked. Sunday picked up with the my friend Chris flying over from tassie to checkout the small press artists alley thank goodness he rescued me from infinite Twilighters. Although I did buy some cool stuff but to me professionally Supanova was a Bust. 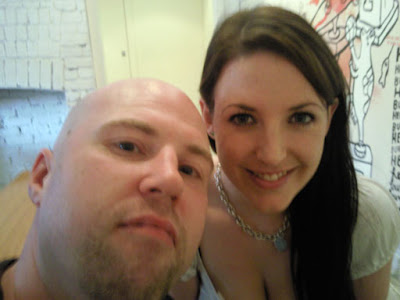 Talking about 'Bust' my friend Angela White has a great one and not only that but she has a brain to go with it....I know Unbelievable Huh?? I must admit to being somewhat nervous when meeting Miss White. Despite having met other Models and big Hollywood Directors she's feisty and honest which I admire alot. I have used her images and poses for my own art and whenever I get a little stale or short on inspiration I look at some of her poses, curves and funness (is that a word?) and get inspired all over again. I enjoyed our hour long talk over lunch with this pure Mistress of Delight explaining my concept of 'Red Licorice' 100 of the worlds most beautiful women captured in one book and I think she said yes to being in it as well as the covergirl, but I'm not sure as I was hypnotised by her true beauty and funny wit. A rare commodity. Actually I'd hazard to say shes the most interesting aussie girl I've ever had the honour and pleasure to have met and I truly mean that, Thanks Angie!
Posted by Unknown at 3:19 AM