Doctor Who and the Break of Doom!

Being a huge Fan of Doctor Who and since the latest series Wrapped Up in Britain Last week, I thought it would be a nice break from what I'm now calling 'The Red' project to draw his latest Incarnation in the form of Matt Smith. With his Massive Forehead and No Eyebrows and ugly demenour He seemed a right fit to play the Doctor. Although sometimes he reminds me a little of the previous Doctor David Tennant he is good. I do like his odd look and having the Fez at the end was a stroke of genius. 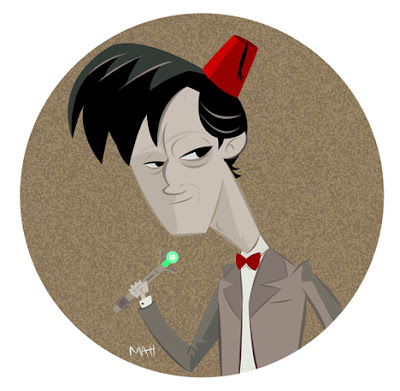 The Show itself was a bit of a letdown better than series 4 by a mile but its not his fault he makes a great addition if Only they would get rid of the whole companion schtick with their having another life instead of just getting on having fun with a TimeLord stopping Mad Scientists and Nutty Aliens and I really Dislike the character of Rory which we now seem to be stuck with permanently. Yuck!

While Drawing this week I've watched the entire Series of 'Adam Adamant Lives' and the First and Second Seasons of SLIDERS. Both good shows. Check them out if you haven't already seen them.
Posted by Unknown at 6:33 AM