I've been off working on my first Graphic Novel 'Lord Fancy' as well as work behind the scenes with Publishing it. I'm not going to talk details without it totally blowing up in my face like so many other occassions but anyway thats the excuse for my absence this month. I'm working on it. 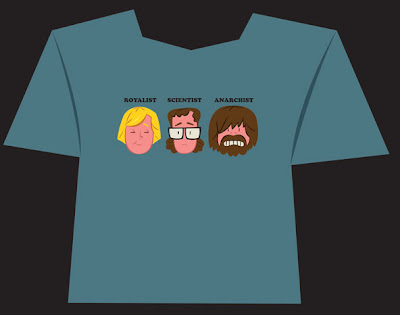 I know there there hasn't been alot of art in recent months because of Fancy, but anyway thought I would share a Tee Proto-Type idea I had. Best I can do for now. I really disliked Python never got into it just boring silly gross stuff. But the Goodies were Silly Fun INSANE Stuff and I just had this urge to do a shirt with these guys. Its not meant to go on the market I was just seeing how it would look and be recieved by closet fans. If I did a Comedy show this is what it would most be like, from Giant Kittens to Loch Ness Monsters to the fight to the death over Cream, Scones and Jam. This show WAS my Childhood right next to Doctor Who. Anyway heres the shirt leave a comment or don't. Just how many people are out there Watching Me? Should I be Worried or Paranoid?
Posted by Unknown at 8:35 AM