I need to clear some confusion thats occurred regarding the reasons I went to America. It was a Vacation of sorts I was travelling under a Tourist Visa and the main goal was to go to Comic-Con and see if there were any opportunities for a guy from the backwoods of Tasmania. I succeeded in everything I set out to do, under this visa a Successful Portfolio review and making High End Connections within the industry while staying around in LA and doing Everything I just CANNOT do HERE. I was never going to get a job in the USA at THAT time atleast under those conditions.

Now I am home I am trying to get a work visa to go back and work in the USA which is very problematic especially in this day an age of those 'abnormally gay cave dwelling bin laden terrorist cells' making everything difficult for us EveryMen/Women. Also I dont have a job in the animation field which doesn't help. The thing is I can fly back there Next week if I had a Job so Unless some divine intervention occurs and I get offered something I am stuck here in this corrupt sh*thole. I want to go back to where I felt at home with people just like me back to America!

Onto something nice...... So I'm leaving for Melbourne yet again for the 3rd and final time for this year anyway. At the end of October. Booked a cheap flight as it was only $42 with just carrybags. I haven't booked a return ticket as yet I'll probably stay a couple of weeks before heading back to dullsville Tasmania. So it looks very likely I will be attending the Armageddon Convention yet again this year. I really hope to get some reduced sideshow figures like I got last year. My favorite was the Han Solo in his Bespin outfit it so totally Rocks! 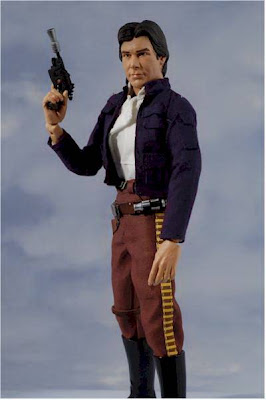 My post yesterday needs some further discussion I didnt want to give the impression I was pissed off about 'Aqua Leung' nothing could be further from the truth. No, me and the writer Mark Smith have been pals for ages and remain so. I prefer honesty and I just put this story out there as something to look at and show that you learn from every job you do! The Book itself is really fun and has great art by Paul Maybury so do yourself a favour and go buy it.

I'm meeting my friend Martin on Saturday its been almost three months since I saw him last. Hes an awesome guy and he also enjoyed Indiana Jones 4 talking about indy I just watched the movie again. The logopolis cartoon I quickly did is posted above the page as a little joke I thought up!

What's Happened to Heroes? I still watch and enjoy but well can somebody please remain dead? Theres no Peril in this show it seems that the actors have such egos they dont want to leave a hit show so they die and come back the next week. Every character has died atleast once! Jeph Loeb you should be Ashamed!

Also did I mention I'm working on my own comic book? yep thats right, no further details yet don't want to jinx it!
Posted by Unknown at 10:53 PM