ARMAGEDDON EXPO DAY ONE or Looking for BRUCE TIMM!! 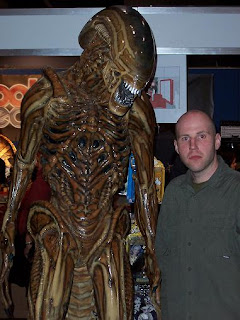 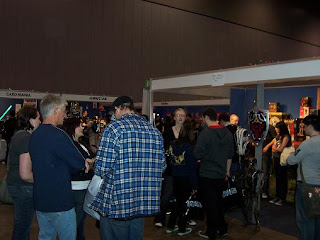 ARMAGEDDON EXPO MELBOURNE
Saturday 13th October
DAY ONE CONVENTION REPORT
Arrived at the Expo at 9:20am and it was somewhat quiet. I got straight in because I got my tickets early. I walked around getting my barings as to where everything was and then headed in line at the Bruce Timm area. YAY gonna meet Bruce I thought. After half an hour of waiting the organisers approached us in line and told us Bruce was only signing the $1000+ cels. In the afternoon he would be sketching and signing anything. It was 10:30am so after that dissappointment my next choice was to head upstairs to the auditorium where the Voice Actors Panel was going to be in less than 5 minutes. I got a fairly good seat and sat and waited patiently

Some of the voice actors were late because they were in their hotel room recording for episodes but they all eventually showed up for the panel they included ;
Rodger Bumpass - Squidward Tentacles in SpongeBob Squarepants
Billy West – Voice actor on Futurama, Ren and Stimpy
Neil Kaplan - Optimus Prime on Transformers robots in Disguise
Richard Horvitz – voice actor on Invader Zim and the Grim adventures of Billy and Mandy
Rino Romano - Batman on The Batman
Stephanie Sheh – voice actor on Naruto, GunXsword, Eureka Seven, Bleach

The Actors began to talk to about their Careers and then it was Q&A I kept putting my hand up to get a question in but they kept going elsewhere with the hand mike. About an hour into the talk the guy sitting next to me left and his seat was filled by another guy. While I was trying to listen to the talk the new guy sitting next to me kept asking me which one was Optimus Prime and I told him. Then he would ask me another question like is the one from the movie or the series from the 80's 90's which one. He would not stop asking questions and interupting my listening. Eventually the guy passing the mike came my way and I thought finally I can ask my question to the voice artists. But guess what Happened??? They gave the mike to the guy who was sitting next to me to hand it to me. But it never made it, He looked at it and decided to stand up and asking his Horrible, Awful, Boring, Unfunny questions This guy was a KOOKY FREAK!! I however was full of RAGE, The Mike was meant for me and he STOLE IT!! I yelled WHAT THE F*CK do you think you are DOING!! You just F*cking got here you......you..........JERK!!! 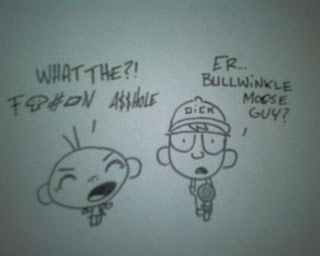 Instead of calling the actors by their real names he would say names like Bullwinkle Moose Guy and The Batman Guy and then he would try to be funny like saying 'I'm Batman'. Eventually the voice actors worked out this guy was not going to give up the mike and so when he started talking even more nonsense about Votron (NO ONE in the Panel was involved in it' Neil Kaplan spoke up and said 'OKAY Man now your just being too much freakin Geeky and all I'm hearing from you is when the adults Talk to the kids in a Charlie Brown Cartoon 'WAHWAHWAHWAH' People laughed so much at that Joke and he finally got the message to give up the Mike...... But not to me That was it No more Questions....... I was SOOOOOOO PISSED!!! The Guy realised he was a F'N Half Wit and kept saying Sorry, Man Sorry But I didn't care I would have freakin decked the FruitCake if I knew that witness' weren't there what a NUT!!

I left the panel really Mad.... Like Ropeable and decided to get in line for the Voice Actors Signing during the 2 hour waiting period I got to talk to a chick from Sydney who was there for her boyfriend and another couple who had the dvd boxset of Invader Zim we kinda kept eachother company and entertained during that time.

So at the 2 hour point this organiser approaches me asks me who I'm here for and I point to Rino Romano and she says " Right your the Last One" To which the people standing behind me threw a wobbly and she had to make the line longer. And so I finally got to meet Rino the voice of 'The Batman' But I had brought along another thing he had done a few years back called 'Star Trek Elite Force' I gotta say he was a really nice guy he signed the instruction Manual for me and told me how much work it was recording the 1000s of lines of dialogue for it. I told him he made the game as the main character of 'Alex Munro' and how it made the game that much better and he was very humble and said thankyou for the feedback. I snapped this photo. 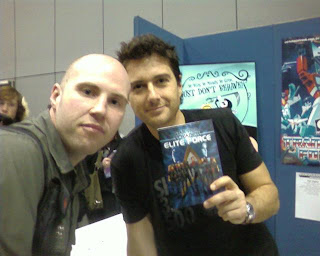 Next up was Rodger Bumpass because no one was talking to him I startedc to chat and asked for his signature he was the dad out of invader zim too so it was cool he was sitting next to Richard Horvitz voice of invader zim and I was just chatting to the two of them about Zim and if it was ever likely to come back in any form to which they said it was NEVER going to happen. Anyway I got Richard to sign my Destroy all Humans Game cover and we talked about his zimmish character in that game 'Orthopox' and he said a third one was coming out soon. Then it was Billy West turn for the Matt Pott treatment I gotta say being in this line of voice artists it was Billy I was most nervous about I was shaking Why I can't tell you I had brought stuff over for him to sign and I promised they weren't Ebay Bound!! He was Very nice but you could tell the time had taken its toll and he wanted a Break from it. I asked him about my podcasts and if he could do a bumper for my show he said 'Not Really' and I said oh I understand I didn't want you to do a character voice just be Billy west to which said Uhhh OKAY!! So I got him to record in my phone and he said 'Hi this is Billy West I do Hundreds of funny Voices and I listen to Matt Pott' It was 5 minutes later I discovered that it was some how lost on my Phone.... Damn I just want one famous person to do a Bumber for my show!! Anyway Special Kudos for Billy for actually doing it he didn't have to his voice is his life so it was good to get a freebie even if it didn't record!! 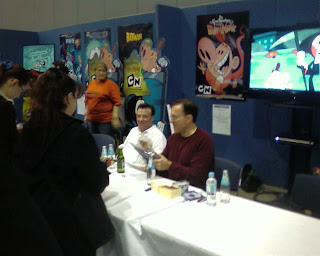 Okays So this is Day one I had hoped to update you on Day Two But unfortunately my Laptop or as I like to Vista Disabled was playing a real bastard today and Ate up all my Battery Power before I started even typing with all these updates. So I shall update you with everthing else and if I did get to meet Bruce Timm tomorrow See You Then Folks.
Posted by Unknown at 11:16 PM