Matt vs The World 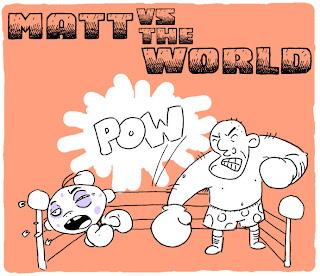 So your an artist trying to make it big in the world of Freelance, Unfortunately the world is a big place and you have every other artist with similar ideas.
Its a War out there.
When you are freelance for a company or Middle Man that takes orders from their BIG NAME clients It's very rare to find a company who wants just you, they want to cover all their bases with as many artists as they can get for the one man/woman project its not up to them its up to their Client on which person they want for it.
This means that your fighting against some of the best artists in the world and thats daunting enough. But mostly when having to do this kind of work anything you do has to be for FREE taking up alot of time and resources to try and score you the job and hopefully the Final Death Blow to your opponent that will ultimately win you the Prize Fight and the money Reward.
Where does my experience play into this ?? I've had numerous battles and I've had no success so far I can still be found in the Ring being pummelled to ittybitty pieces by more seasoned fighters if you think its easy you are sorely mistaken!!
Posted by Unknown at 4:30 AM