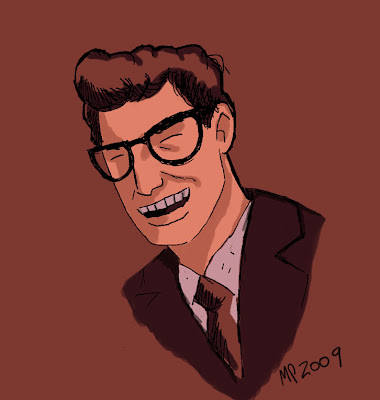 In 1959 American Music lost one of its founding fathers, Buddy Holly. For 4 years he Rocked the charts and Fifty Years todays hits the anniversary of his tragic death. I was first introduced to his music by my mother as she grew up during that time and was only a year away from marrying my father!

I remember buying a cassette tape of his music and listening it on long drives across australia when I was in my teens. The Song That'll Be the Day That I Die seems somewhat Poetic in his short life. My personal favorite though is True Love Ways no idea why maybe because its very 'classic' in tone like an old band playing I love the the Saxophone in it with its Melody.

I didnt want to do an illustrator based drawing of him so basically back to pens and paper. I hate to colour in photoshop but didn't turn out to badly I think.

Managed to also set up the internet down here on Bruny Island and will hopefully be able to fulfill my scheduled Character Design Project I hope You all check it out in the coming days!.
Posted by Unknown at 4:23 AM